The 9th Planet Skill Set 3 videos model the relationship skills that are critical to finding a job – not just any job, not a make-work job created by a company to fill a disability “quota” — but a satisfying job that’s a good fit with the interests and skills of the person on the Spectrum.

One of the videos in the Skill Set is called Learning About Jobs. This weekend we shot two scenes from the “Learning About Jobs” script at The Bikery, an independently-owned coffee shop in Stillwater, Minnesota. (The snowy shot below gives our northern location away). 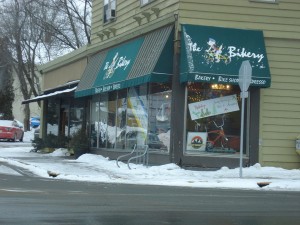 In the video, Tad learns how an acquaintance — a girl named Daphne — scored a job interview at a local photography studio even though the studio didn’t have a “NOW HIRING” sign on their door. Daphne is played by Anna Lantz, a talented young woman who also appeared in the Skill Set 2 video called Empathetic Listening. A little ironically, during the shoot, Anna got a message that she’d been selected to interview for admission to a college in California. Way to go, Anna!

The Bikery was a great location. It has colorful walls, retro-to-funky furnishings and bicycles or bicycle parts hanging everywhere. The staff quietly worked while we ran through lines, moved the camera around, changed lights, put duct tape on the floor to mark the actor positions and shouted scene numbers/take numbers/ACTION!! One coffee shop employee even agreed to play the girl behind the coffee shop counter who takes a hot chocolate order from Tad.

Next week, we’ll finish shooting for the Learning About Jobs video at a locally-owned photography studio in Hudson, Wisconsin.