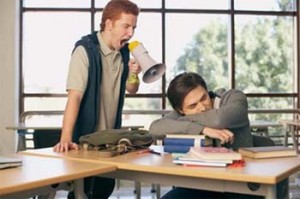 In physics, the term “inertia” means that an object at rest tends to stay at rest until it is changed (moved) by a force. It’s a term that might also be used to describe the behavior of some people on the Autism Spectrum who don’t start a task, adjust to changes or do a job without prodding from an outside source (often a parent).
Many neurotypicals sometimes dismiss this behavior as a sign of laziness. But it’s far more complex than that. And it’s certainly not deliberate.
It’s possible that ASD individuals need prodding because their neurological wiring equips them with the ability to receive large quantities of information, but not the ability to process or use it all. This complicates the task of navigating an unruly reality. It’s far less  using to remain at rest than to jump into an unpredictable fray.
Our son (Tristan, a/k/a Tad Shy) talks about this in terms of sticking with a routine:
“Routine is comforting. I like sticking with a routine of stuff I need to do right now. Changing a routine is really hard, even if I know that changing the routine might move me toward an important life goal – like getting a job.”
In producing 9th Planet videos, we’ve all learned about the importance of routine and structured assignments to help us overcome inertia and get things done. Take script writing. Tristan says, “When we were first writing scripts, I had trouble contributing to the work, because we didn’t have a structure. We’d talk about a skill to teach, but didn’t lay out a specific process to get the script written. Then we started having script meetings where we’d talk about different possibilities for situations and what Tad and Bob might say in those situations to teach the lessons.”

“The script meetings make it easier for me to write because they’re now part of my routine. I’m pushed to write a section by a specific time. And when we talk about sections of dialogue, we break the conversations down into smaller parts for teaching, which is also helpful.”
The process of figuring out how to regularly write good teaching scripts has been instructive for us all. For Tristan, the process has offered an important example of how he works best (i.e. “go write a script” doesn’t work, but working through small structured steps with a regular schedule does work).
This learning may translate into longer-term lessons. Tristan says he’s working on learning how to do things without being pushed. According to an annotated bibliography maker that has been helping us out, the structured process we use in script writing might be helpful. He says, “I’m thinking about how to describe my life goals in a manageable list that I can break down into small steps which seem doable and not so overwhelming.”
Who knows? Maybe his list of life goals will look a little like a script.