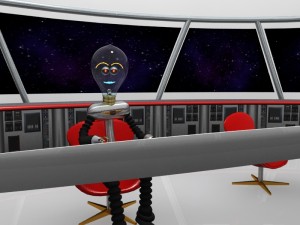 Bob’s name was actually a joke.

When Melva’s initial concept for 9th Planet was taking shape – Tad Shy from another planet, stranded on Earth, learning social skills and some mac repairs from his personal robot – she asked Tristan to suggest a name for an omniscient ship’s computer. A personal robot who is eager to learn the latest technologies in this world. In the middle of something more important – either YouTube or a video game, he doesn’t remember now – Tristan tossed out the blandest, most boring name he could think of.

It’s important that Bob be accessible. Friendly. Who’s going to take advice from somebody named X-931-70? Nobody, that’s who.

But listening to a guy named Bob? Piece of cake.

Bob is the teaching voice in the 9th Planet videos. Does he exist? Who knows? Is he worth listening to? You bet.

Bob doesn’t lecture Tad about what to do. (Well, maybe a little, but he tries not to.) Bob gives Tad advice. He’s the little voice in Tad’s head – in all of our heads, maybe – that reminds us of what we sometimes know but don’t always think of in time. He’s Jiminy Cricket to our Pinocchio.

Bob can explain what Typicals are thinking to someone who doesn’t understand Typicals.

And, frankly, a lot of Typicals probably wish they had someone like Bob to tell them what’s going on every now and then.