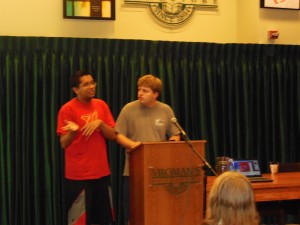 Re-Posted Blog by Debra Hosseini – The Art of Autism

“I was deeply touched by the great sense of support and genuine regard for one another that was so obvious when Chris and Shane did their presentation at Vroman’s. The total absence of being competitive in any way combined with their great sensitivity to one another is all to rare in our culture. They were truly cheer leaders for one another– pointing out the other person’s talents and accomplishments and stepping in with prompts for the other person when necessary. Their friendship is truly edifying and sets an example for all of us of ‘how to call forth another person’s best.’ They know the true meaning of friendship.” Connie Kalter, Vromans, August 2013

There is a myth that autistic people can’t bond and make meaningful friendships. I’ve observed many on the spectrum who have closer friendships than many neuro-typicals. They may not have a lot of friends, but the ones they have are deep.

A couple of weeks ago I was at Vroman’s bookstore in Pasadena for a book signing, invited by the dynamic Kelly Green of Autismhwy.com. As always we invited participants in the crowd to show their art and share the projects they were working on. Everyone in the crowd was impressed with Chris and Shane. Chris and Shane have been friends since the third grade. They seem to have a closeness and bond that only a few of us experience with friends.

When Shane was sharing his animation drawings, Chris asked questions of Shane which brought out the best of Shane and made him shine. Shane did the same for Chris. You could tell there was no competitiveness or jealousy in their friendship. Each of them truly wanted the best for each other. I was sitting next to the coordinator for the event, Connie Kalter, who was deeply impressed. Many think that autistic people are unable to make friends. The events I participate in show this is far from the truth.
Chris and Shane

Chris and Shane inspired this blog. They made me think of the many friendships develop over the years I’ve been facilitating the Art of Autism project. Often people on the spectrum make better friends as they seem to value important things rather than the superficial.

Many times friendships develop among different-aged participants. This ends up looking more like a mentorship-friendship. For example, last year in Ventura everyone was impressed when Andrew Mendoza gave Kai Viruleg a painting of a Collie that Kai admired. The gesture was beautiful and genuine.

Michael and Andrew and Wyatt

Andrew Mendoza and his mom Rosie received a beautiful painting in the mail a few months ago from Michael Tolleson. Wyatt, Kelly Green’s son also received a painting from Michael. That made me think of how the cycle continues. Generosity of spirit is what friendship is about.

Friendship can develop between nonverbal and verbal people. Last year, I wrote an article for Autism Eye about the artist Eddie Callis from the U.K. Eddie has developed a close relationship with the amazing vocalist Kyle Coleman. Kyle is nonverbal. Eddie encourages Kyle in the arts and thinks one day he can help Kyle to speak. They have a true friendship.

I wrote a blog last year about the Autism Movement Therapy workshop, where Dani Bowman reached out to my son Kevin. Dani is a friend to many.

In Hollywood at Mr. Musichead, Dylan Aragon sang with Nick Guzman accompanying him. Nick stepped out of the spotlight to allow, Dylan to shine. The owner Sam, told me later, that our event was “life changing” for him. I think he told me this because the average person who doesn’t know many autistic people have preconceived ideas about autism, that may be far from the truth. That is because the media has done a number on us.

The Art of Autism hopes to continue our events in the future. We hope to see many more friendships continue to blossom and grow. I’m ending this blog with Kyle Coleman’s “Just Listen” because when we listen we can be better friends.